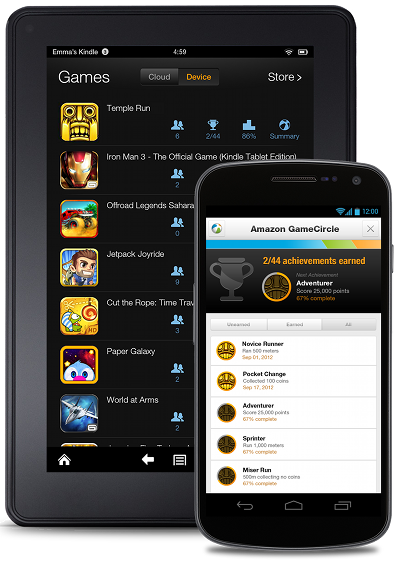 Amazon’s very own Game Circle which has been released to compete with the Apple’s Game-center has been now made available for all Android users. This specific gaming hub was previously was limited with Kindle devices where players can have a single platform leader boards and they can easily access and track their achievements.

The whole concept has been shifted to the Android store to make sure all Android gamers can access the facilities of this platform. The developers at Amazon has now allowed all Android games/app developers to include the GameCircle platform in their apps too. This will help millions of Android game geeks to gather on a single platform and enjoy their game leads.

In a post on the original Amazon blog the developers emphisized that the decesion will benifit the Android game lovers and the Amazon developers as well.

The content taken from the Amazon blog reads as, ”

We just released a major update to Amazon GameCircle, our free game service providing achievements, leaderboards, and Whispersync for Games. Games on all Android devices (including Kindle Fire, of course) can now integrate GameCircle, which is easy because we support Java, JNI, and Unity3D. In addition, Whispersync has been dramatically improved, becoming the first and only cloud-save service to:

1) Automatically resolve data conflicts between mobile devices and the cloud,

3) Offer a simple interface that can be integrated in minutes.

The result: Your customers’ game data will automatically sync across devices—even if they play your game while temporarily offline—and you can concentrate on using the data instead of persisting it. You’re not locked in, though; you retain ownership and can always get a copy of the data you store.

We also give you flexibility when it comes to GameCircle display options, with no intrusive splash screen and configurable notification toasts. You’re in control and choose where they appear.

I’ll provide more technical details about these enhancements in future posts, but for now, let’s take a closer look Whispersync and explore its powerful new features and simplified interface.”

However on the other side Google is already busy in making their own Gaming platform Google Play Games which is surely ready to be announced in coming days. The interface and the images of the whole platform has been already leaked online. So one can say that Google is much more eager to introduce it’s very own clod-based gaming service for it’s millions of Android subscribers.