XBMC media center developers launched a new application for their Apple TV users that can be ported to the 2nd generation Apple TV quite easily. It can also be ported to the iPad and iPhone 4x. This will help you in playing media without the help of iTunes or in other words you can play any type of Media files or format. The XBMC application can be installed on any jailbroken device and is available for download at their official website. [LINK].

The Apple TV2 was also a great hit as the 1st series of Apple TV. The unit sold in millions but this time it was quite limited as it can only play media that is in iTunes compatible format. The users who tends to rely more on other media formats like AVI have to face a lot of transcoding in order to stream media on their Apple TV2.

The new XBMC media center or media player supports a wide range of codecs that can be used to play any type of media on Apple Tv2. As discussed earlier this software only supports Jailbroken units of  and can be downloaded from the XBMC website, because there are no hints of such helpful apps on the Apple app store. 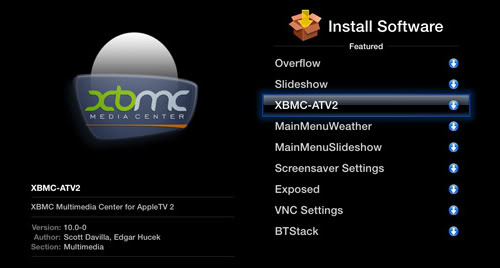 However while Jailbreaking Apple TV you have to be very careful and read the whole instructions given on their website.