Most of us thought the patent war between Apple and Samsung has been freezed, but it has been dragged to a new level with Apple again posting some more allegations on their rival korean company. This time the hype is all about the newly launched Samsung Galaxy S4. The lawyers at Apple have issued legal notice to the latest Samsung development, pointing fingers to 5 patents that have been owned by Apple.

The patent war has been started in early 2010 but last year it was on its highest level when both companies were head to head on different patent issues. In this war Apple has been always found on the attacking side while Samsung was on defence. However the buzz around made Samsung even more popular on the United States soil as before, and that popularity can be seen reflecting with the best ever sales of the latest Samsung Galaxy S4 which has broken all previous records.

However lets us talk about what makes Apple to blame their rivals with their latest device and this time we can see the whole case has been found dragged around these 4 main patent infringe. 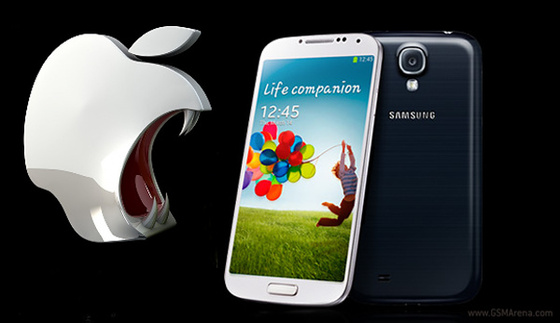 As you noticed the 3rd and the 4th patent is all about the Apple’s very owned Siri service which they claim that most of its features have been copied by the Korean company in their latest Galaxy S4 phone with the addition of S-voice.  It also covers the more enhanced newly developed Google Now service which has been mostly found in every Updated android device. Google Now has been made an essential part of Android 4.1 Jelly Bean and it has been found now in all upcoming updates. The unified search box patent is also about the same Google search updates which according to Apple resembles the current Apple search apps.

Apple’s move comes roughly a week after it won an order to have Google submit documents regarding the Android mobile platform. According to Apple, Google must disclose how they are searching for documents previously requested by the Cupertino-based company. U.S. Magistrate Judge Paul S. Grewal granted the order.

Apple has now officially pledged to the Judge in Silicon Valley to add Samsung Galaxy S4 in the list of devices targeted in a patent lawsuit involving Siri personal assistant software.