One of my favorite weather widget is one of those awesome widgets that have been included in the most awesome widget pack ” Beautiful Widgets“. This is still the best android widget application which has been downloaded millions of times. The users who have downloaded these widgets seem quite satisfied with it as it has overwhelming appreciation graph at Google Play Store, with over 82,000 people voted an average of 4.5 stars out of 5, even though it was not free and you have to pay $2.49 to get some beautiful clouds floating on your main home screen.

Now the developers of these widgets Level Up Studio who have been included in the top developers list have decided to let you download it free*. Not totally free but you have to play their sponsored games and install some extra apps that will let you gain some gold coins and when you get 50 coins  you are eligible to unlock the premium version of Beautiful widgets.

The whole new scheme looks more spammy, I prefered to pay 2.5 bucks and installed it, instead of installing all those free full of ads applications to play that gold coin game.

But most of you would love to use it for free, so in order to use this free version have to unlock their functions GetJar Gold points recommended to download applications. We need 60 points and most recommended applications are 30 points each, so when you download two applications we would have totally free unlocked Beautiful Widgets. 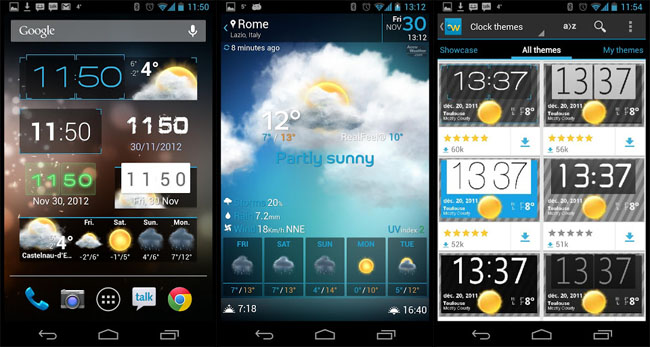 Beautiful Widgets allow us to add on our desks its widgets clock, time, battery and switches to enable / disable the brightness, WiFi, Bluetooth, GPS , silent with or without programming, vibration and rotation. In its internal store enough designs can download free.

Some of top tech sites have praised this widget pack in their own words which have been proudly displayed on Google Play store by the  LevelUp Studio developers.

– Android and Me: “Beautiful Widgets is one of the essential must-have Android apps, and has been for quite some time now. If you still haven’t managed to buy the app, there’s no time to waste.”