The new Android 5.0 Lollipop is on the verge of release and there are tons of new designed stock Android apps that are all being refurbished with the new material looks. The new designed user interface is the core of latest Android 5.0 Lollipop. With all other Gapps, the Google’s very own Camer app has been also updated to the latest version, Google Camera v2.4.023 apk.

This specific update is signed by Google so all the users who have issues with the previous Google Camera  installation can install this version of the app and it will work on their non rooted devices as well. The released copyright signature  with the apk files ensures that the file is safe to download and install on any Android device running Android 4.0+.

The new Google Camera update brings the most talked about Material designed User Interface which is going to be themed in with the Android 5.0 L to be released for the Google Nexus series devices on 3rd of November. The Google Camera v2.4 has all other features in tact as the swiping from right to left will bring the gallery while swiping from left to right will pop up the menu loaded with the same 5 features i.e,  Photo Sphere, Panorama, Lens Blur, Camera and Video.

Other than the flat looking Material design icons, there is still no big difference between the previous version of the app and this recent update, Some of the users have been reporting that the photo quality of the device has been improved as compared to the previous version of the Google Camera app.We have got the link to the Google Camera v2.4 Apk for you to download and install it on your device. It has been spotted working smoothly on the Google’s very own Nexus devices. If you have any other rooted device then you can install this stock Google Camera app on that device as well. 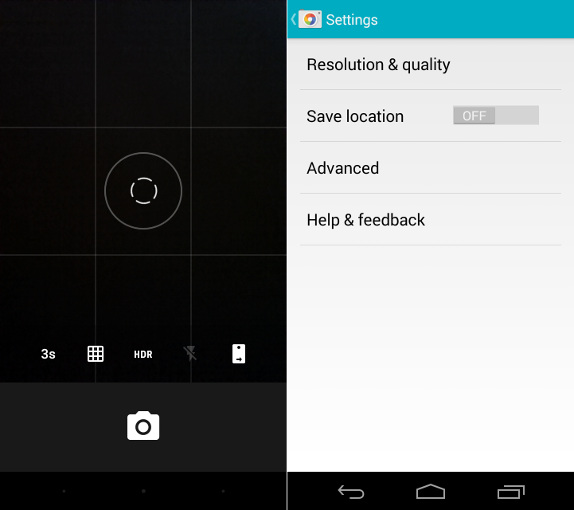 1- First of all Download the Apk file in the given link below.