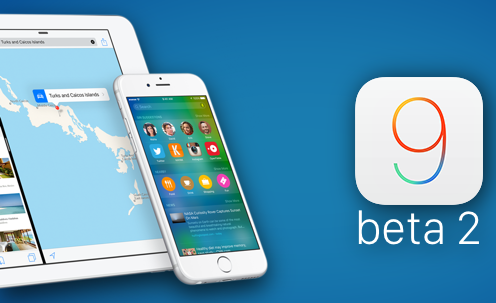 So as expected we have got the 2nd beta version of the iOS 9 rolled out today. With all the expected changes and features the iOS 9 Beta 2 has been issued for all the iOS app developers who have been quite keen to get their hands on this latest version of the iOS on their devices and test out their apps with regard to the upcoming changes that this operating system will bring to the devices.

With the latest change-log that has been issued by the developers at Apple the iOS 9 Beta 2 build 13A4280e  has interesting changes added as compared to the iOS 9 beta version which was rolled out last month. The beta version of the iOS are usually made for the developers but we have brought the iOS 9 Beta 2 IPSW file links for our readers so that they can try it on their own devices including  iPhone 6 Plus, iPhone 6, iPhone 5S,iPhone 5C, iPhone 5, iPhone 4S, iPod Touch 5G, iPad Air 2 6G, iPad Air 5G, iPad 4G, iPad 3G, iPad 2G, iPad Mini 3, iPad Mini 2 and iPad Mini and all other versions that are posted below.

Beside this you can read about the change log of the iOS 9 beta 2 as given on the official site of Apple. You can read more of the ChangeLog here.

iOS SDK 9.0 provides support for developing iOS apps. It is packaged with a complete set of Xcode tools, compilers, and frameworks for creating apps for iOS and OS X. These tools include the Xcode IDE and the Instruments analysis tool, among many others.

With this software you can develop apps for iPhone, iPad, or iPod touch running iOS 9. You can also test your apps using the included Simulator, which supports iOS 9. iOS SDK 9.0 requires a Mac computer running OS X v10.10.3 (Yosemite) or later.