Apple’s next iPhone is just around the corner and we are still waiting for the official keynote by the Apple. There are reports that the Foxconn, one of the leading companies in assembling Apple products, Says it is already in the process of preparing to produce the next iPhone as demanded by Apple. 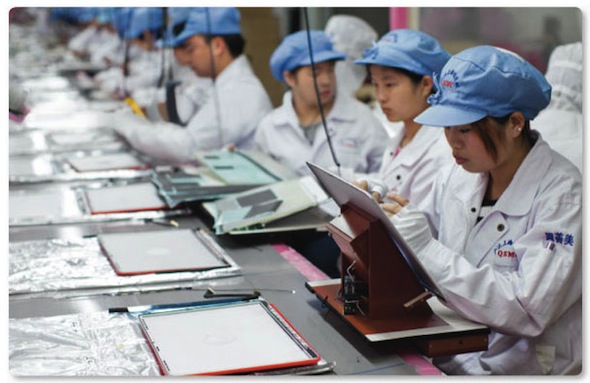 A reporter from inside the Foxconn whose quite familiar with the plans of the company has assured Bloomberg that Foxconn is already preparing for the imminent production of Apple’s next iPhone, which is commonly known as iPhone 5S , but actually the end product name is still a mystery because Apple didn’t claimed that the next iPhone will be named as iPhone 5S.

The news is obviously a happy news for the Foxconn employees as recently they were facing some uncertainty because of the immense decrease in the companies profit due to the poor sales of iPhone 5 in last quarter. The company already hinted the termination of contracts before this announcements. But situation got reverse in a little time as Currently, the company is going to hire people to take charge of the impending lawsuit by Apple to produce the iPhone 5S. In addition to that Apple will still continue the production of iPhone 4S and the iPhone 5. So there is too much work for Foxconn for the year 2013.

This news however confirms all those rumors that speak of June or early July as the date chosen by Apple to launch the iPhone 5S.   It seems like Apple is going to break the cycle of the September or October announcements of all previous iPhone’s. Just like they did with the new iPad in April. However, the analyst Ming-Chi Kuo told that Cupertino may encounter technical problems in assembly.

These problems could be related to the persistent rumor that says that Apple will incorporate a fingerprint reader on the Home button of the next iPhone 5S. If true, it would be one of the major functions implemented since the launch of the first iPhone, as it would be a whole new segment to be introduced in Foxconn. It will open the door to functional electronic purses. According to Kuo, this will mean a delay in expected date of launch of the next iPhone.

What is certain is that the iPhone 5S will appear sometime this summer or in September, repeating the filing date of the iPhone 5.