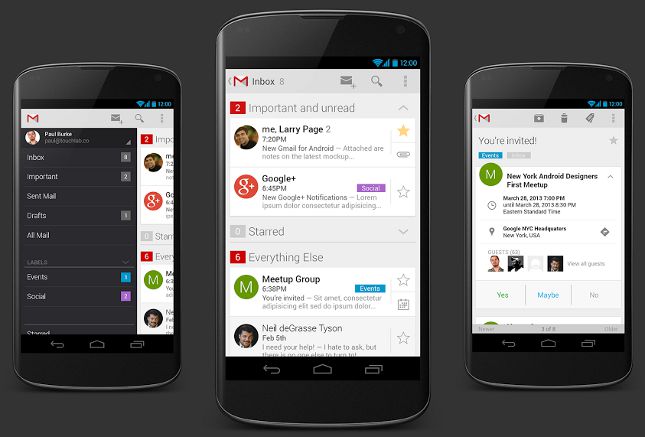 Google has been working continuously in developing new apps meanwhile they consider to update their previous apps regularly  In this regard a designer for Gmail for Android has come up with an awesome new design which is really an appealing concept of Gmail. The designer Paul Burke also provide the rendering images with its profile. The expected design shown by the Google employe can be made realistic with the launch of next Android 5.0 which is codenamed Key Lime Pie. Hence the designer named it Gmail 5.

What is new in Gmail 5 Concept:

In his Google + profile Paul has mentioned his ideas about the specific design that Google have been seen adopting for all it’s app, yes it’s all about clean and smooth design of the Google Now which have been lately applied on Google Play Store Version 4.0. The other apps that follows the same design formula are Google Keep which has been recently announced while Google Babble leaked screen shots also comes up with the same impressions.

The most part of this newly concept designed Gmail for Android app came from the Gmail for iOS. Which has been updated in for the latest iOS 6 for Apple iPhone’s and iPad’s.

Paul Burke further mention his concept much clear by stating, ” The basic premise of this redesign is new navigation, and more focus on people and content. I’ve been working on this in tiny bursts for a while, and wanted to get more screens done, but at this rate, the actual app will come out first. I hope to, at least, get more done to show how the cards would work in the Conversation view. We’ll see…”

In this concept  Gmail app he made some of the changes or improvements, which according to him are new addition of sidebar, new icons placed on top of each email, larger headlines, quick attachments or calendar access. Furthermore he added, two-finger swipe up or down gestures that will allow users to archive, save or delete the emails.

Overall this design is so pleasing and the way it is described makes it even more desirable  We hope Google will come up with such a cool app for it’s next Android 5.0.