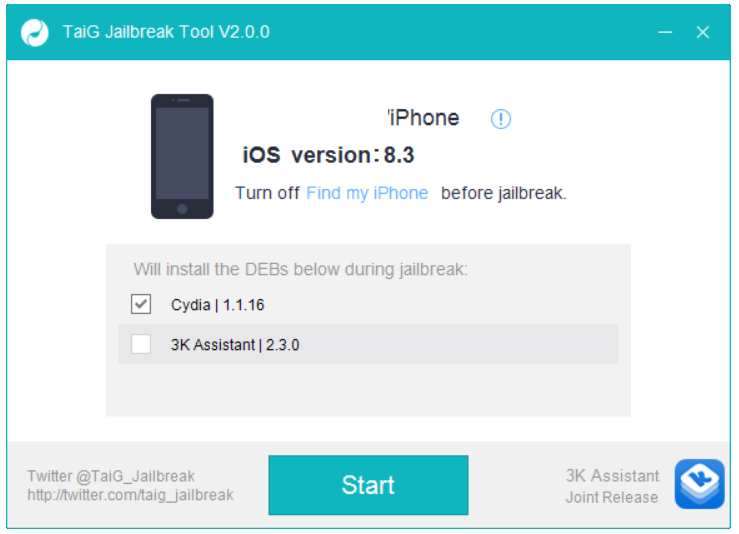 So here comes the iOS 8.3 Jailbreak every one was waiting for and this time we have this most authenticated report that the best Jailbreak Taig Team has finally Jailbroken the latest iOS 8.3. Here we give you the official download link for the iOS 8.3 Taig Team tool which has been released a couple of hours ago. We will let you know how to Untethered Jailbread iOS 8.3 using TaiG Tool v2.0.0.

The tool has been released by the renowned Chinese hacker team TaiG who have been working for the jailbreak for sometime now. As we reported previously the team was more keen to Jailbreak the iOS 8.3 rather then spending some time for the previous versions of the OS and to release the Jailbreak patches for those versions. So now we will guide you through the whole process how to Jailbreak iOS 8.3 Untethered for iPhone.

All you have to do is follow these steps given in the guide below to get your iPhone, iPad or iPod Touch loaded with iOS 8.3 Jailbreak it and load some of the useful mods, tweaks or even themes on it.

Step 1: First of all make sure to download the official TiaG Tool v2.0.0 which is recently released with all the iOS 8.3 Jailbreak features loaded on it from the link given below.

Step 2: Now turn on your iOS device and head to the following settings menu to turn off the Passcode by following these options.

Step 3: After that head to the settings menu once again and turn off the “find my iPhone” option.

go to Settings > iCloud > Find My iPhone > Click to turn off.

Step 4: Now connect your device with the PC via USB cable. Make sure that you have installed the correct version of the Tiag Tool from the above link. Start the TiaG Tool.

Step 5: Once done you can now click on the Start Jailbreak button and it will start doing the magic. All you have to do is wait patiently till the process completes, as seen in the images below.