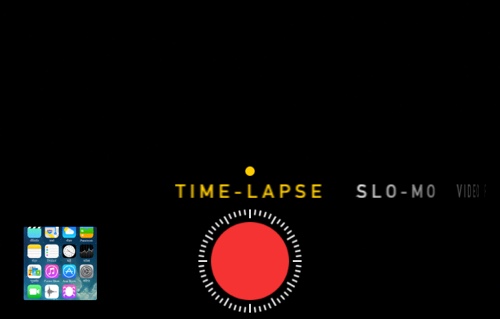 If you have updated your Apple device to the latest iOS 8, you might have noticed some new features in the new firmware update. The most talked about are the support for third party keyboard and widgets, some stock apps like health care etc. But the ones you might no heard of yet are the special features added in the Camera app. Though there are some new tweaks added in the camera apps which we would like to discuss later including Focus & Exposure control, Self Timer mode, HDR features, New photo editing features, Favorite photos, Hide photos etc but the most amazing feature among all is the Time Lapse mode.

The Time Lapse video will make users to forget shooting long videos. All you have to do is place your camera and focus on a point and set exposure using the Focus & Exposure tool and press the red button. This Time Lapse feature will automatically focus on the object
Found to the left of Video mode on the ring selector, Time-lapse mode is a set-it-and-forget-it way of capturing long sequences of video. To use it, just select Time-lapse, set your focus point and exposure, and then press the red button.

The developers at Apple claims that Apple will start taking the frequency of photos and will automatically merge them with the time lapse ration of 10 – 12 times as compared to the real time video capturing facility.  You can shoot the video as long as you want, or till the limit of your iPhone or iPad storage.

After you stop recording the video by taping on the Red button again, the app will automatically speed up the recorded video to create the time lapse of that video which will be 10-12 x faster as compared to the ordinary video. You can watch a 8 min video recorded here and shown in 10 seconds. This Time Lapse camera feature in iOS 8 is the best thing I found in iOS 8 update.