The Taiwanese High Tech Computer Corporation (HTC) was among the first to introduce smartphone early this year, but since then we didn’t see any progress as the HTC One delayed the whole proceedings, and this would have hurt company’s overall earnings early this year.

However, it seems that HTC has traced a little with revenues of $ 530 million from other smartphone sales, representing an increase of 40% from February, but still this isn’t seem to be a happy deal for the company. February data shows some horrifying stats as the sales were too low and the news for HTC One were dumped under the rumors of other smartphones coming to the market.

The increase in the revenue from what stats suggested is however quite incredible. But comparing the stats of Fall 2011 with 2012 that shows a huge decline in the company revenue. HTC would have got some better sales if the HTC Butterfly would have been brought to the international markets. It seems like the company decided to sacrifice the same specs device for the HTC One, but the later has also consumed so much time and we aren’t able to get the fixed release date. 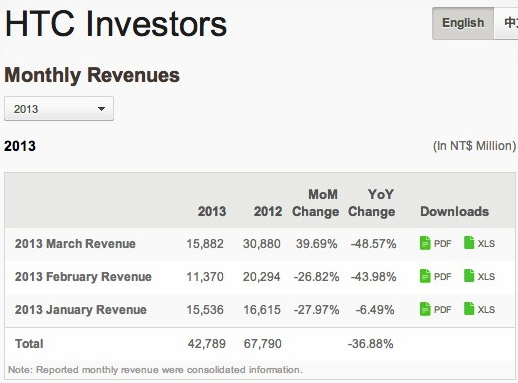 It is clear that the market is more complicated than the HTC’s predictions, but the HTC one is also a powerful weapon, perhaps the best of the Android platform in many ways. So HTC should reap good numbers with that gadget in their pocket, but that will be need to be launched now or as soon as possible. We will wait to see the numbers for the next few months.

But still there are some tough challenges ahead, and I will love to mention the announcement of the Samsung Galaxy S4 which has been always a great threat to the HTC’s popularity. Samsung already started the advertisement campaign, keeping in mind that Samsung don’t feel hesitant in throwing some extra bucks in their buzz campaign for buying TV spots in the most busiest hours of the day/night. Last year Samsung spent around $400 million in a mass campaign for the  publicity of their smartphones.

Can HTC manage to cope with those high stakes ? or will remain an underdog even with the best smartphone under their flagship.