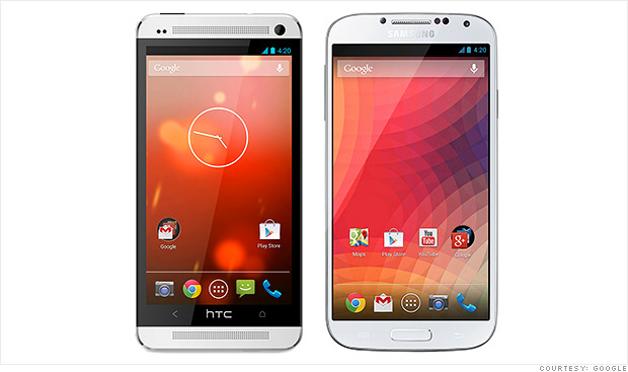 Both Androids most successful Flagships Samsung and HTC had showed up their most valued smartphone with a new Stock Android loaded on them. Yes the HTC One and the Samsung Galaxy S4 who have been sold well over 15 million devices in their 1st month sales results have joined hands with Google to sacrifice their very own HTC Sense and Samsung TouchWiz user interface and adopted Androids very own looks and feels.

The new Stock Android version of both HTC one and Samsung Galaxy S4 are available online at Google Play Store but for some specific countries at start. For such handsets a new terminology have been started to develop among the tech freaks, as more folks starts naming them as the Google Play Edition or to be short as GPe. Other details about then new HTC One Google Edition and Galaxy S4 Google Edition  can be found on these highlighted links. These links might not open in most of the countries

Both the devices will hit the store with the most updated Android 4.2.2 Jelly Bean version loaded on them and most interestingly the official Stock Android user interface will prevail the custom UI. Both devices available online are contract -free unlocked versions so you don’t need to tie yourself down for another two years of financial commitment. 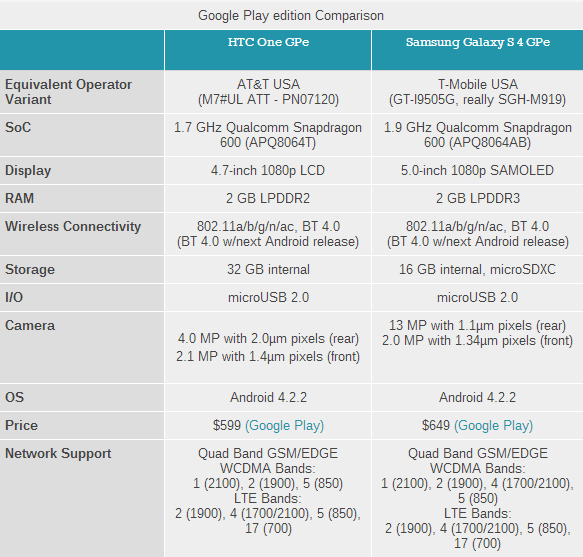 The prices are a bit steepy but still with Stock Android and chances of getting best out of these powerful devices the following deals aren’t that bad. The HTC One Google Edition has a price tag of $599 while the Samsung Galaxy S4 has a price tag of $649 which is $50 more than what HTC One offered their GPe smartphone. The one thing to keep in mind is that HTC One GPe offers a 32GB internal moemory while the Samsung Galaxy S4 offers only 16GB variant. But you may also know that Galaxy S4 has always that advantage of microSD card support, with the option of 64GB extendable memory.  A detailed specs sheet can be seen below.

With the availability of Galaxy S4 and HTC One Google Play editions rumors are hot that Sony Xperia Z will also shows up with the same edition soon. Anyways lets wait and watch what folks at Sony will do with their own Xperia Z. 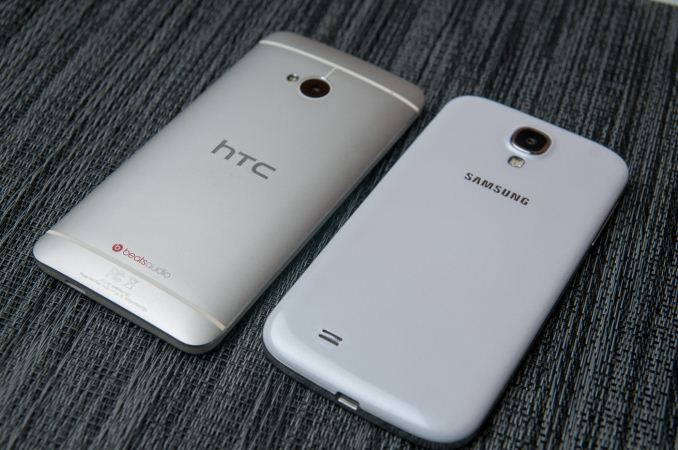 HTC One also got the Google Edition with the Stock Android version to hit the market on June 26.