PikPok games  has released a fantastic game “Into The Dead“, that will surely break some record sales on Android. This Zombie survival game is the best Zombie version of a runner-style games you often play like Temple Run. The game is quite addictive with hundreds of objectives, coins system and the distance goals. 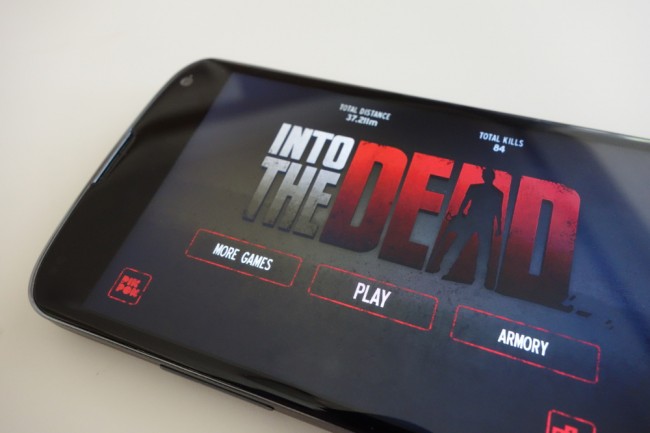 The Zombie lovers will surely be addicted to this Zombie genre game. It’s full-bloody with awesome soundtrack and quite creepy as well. In other words it’s quite a treat for the new Zombie lovers breed.

The objective is to survive in a world filled with zombies for as long as you can. You start off in the middle of field just after a helicopter crash only to realize there are hundreds of zombies on the verge of gobbling your brains. You turn and run away, dodge between outreaching zombie arms, jump fences, find safe passages through corn fields and forests, pick up guns and other weapons along the way, all while trying to create the highest score possible. As you stretch your top distance, amass a coin collection, and conquer perks, you’ll unlock new weapons (like a chainsaw or shotgun), new zombie packs, and other bonuses. It’s awesome.

Oh, Into the Dead is also 100% free. There are ads in between games as you transition menus, but never while you are in the middle of a session. It definitely operates under the freemium model as well, tempting you with coin purchases to unlock perks and weapons even faster.