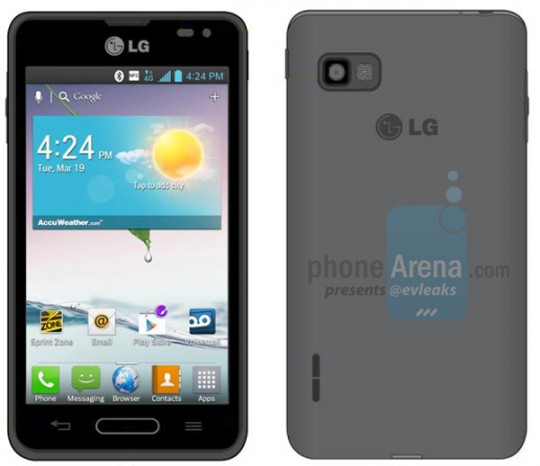 @evleaks comes up with yet another leaked informatic tweet and this time its about LG’s next phone, LG Optimus F3 which is the upcoming device for the Now Network. The most acclaimed online smartphone leak news source claims that the device is a budget friendly Low-end smartphone. The F series was first announced by LG in the Mobile World Congress and this time the LG Optimus F3 seems to be heading to various United state carriers soon.

The leaked tweet mentioned by @evleaks was pointing to the tech site Phonearena  which didn’t appear to produce some real infos like full spec sheet , price and availability of the upcoming device the LG Optimus F3.  Before this LG has already announced 2 more device named as LG Optimus F5 and the LG Optimus F7. The first one among them is a mid-range while the other Optimus F7 can compete with any of the current High-end android phones available in the market yet.

We can make a wild guess that this LG Optimus F3 will be low-end device as we already have an mid-level and High-end F series devices announced by LG. The Optimus F3 could have a Dual-Core processor with atleast a  4-inch display expected, the size can increase too. Overall the device will be built with low level material mostly plastic and as seen in the above image the LG Optimus F3 will come up with a 5-megapixel camera with a flash support. The front shows a regular Home button which has been seen on the other Optimus F series phones.

The reports however suggests that the LG Optimus F3 will be heading towards some US carriers including Sprint, AT&T and the Now network. You can stay tuned for further  informations about this device.