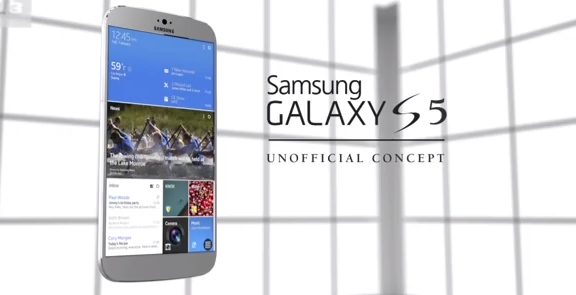 There is no doubt the most anticipated device of 2014 currently is the future Samsung’s Flagship device, The Samsung Galaxy S5, so we have been watching a lot of concept designs and live 3D renders of the device on different sites. But we have spotted a new Galaxy S5 3D rendered images  which we regard as the best so far. If Samsung truly followed this concept that it will be breaking all sales record and this can lead to the most sold phone in the world.

Well talking about the concept design video, The Galaxy S5 shown here is the best Samsung design I wished so far. It’s Aluminium body, slim design and state of the art finish made it look like a precious gem. The features or the specs shown in this video are also the best one can imagine on a smartphone yet. The video has been made by Experts at T3 mobiles.

The 2K display which has twice more resolution as compared to the current Galaxy S4 will be the most acclaimed feature. There is a 16 megapixel camera which can shoot 4K videos which is also quite impressive. Moreover the leaked images of Galaxy S5’s block [Windows Phone8] type User Interface have been shown as a reality in this concept video. Most of the specs revealed in the video has been reported in many rumours and leaked reports. Watch the concept video of the Galaxy S5 below.

As far as Sony Xpreia Z2 concept shown by Jermine Smit, we will have an extremely thin design with a display of 5.2 inches and the back-cover entirely in aluminium. The hypothetical specifications should be 3GB of RAM, a rear camera of 23Mpx, a front-facing 2.5 mega pixel. The Xperia Z2 concept video doesn’t show much detail as compared to the rival Galaxy S5.

But still both these videos show everything that fans are expecting to have in the future flagship devices by Samsung and Sony. We hope that you will love the new concept designs especially the Samsung Galaxy S5 design and specs sheet, though Sony Xperia Z2 is also look great but our winner is the Galaxy S5.

Meanwhile here is the video of the Sony Xperia Z2.