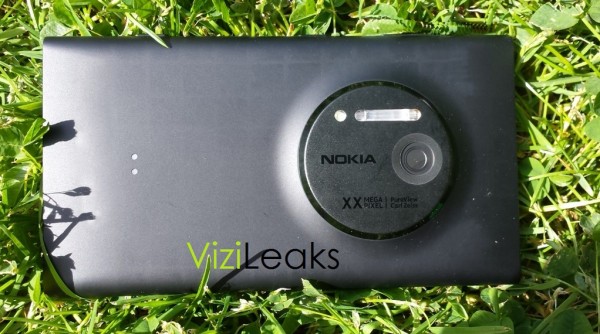 The very first images of the well known Nokia EOS smartphone leaked today on two different sites, showing the upcoming Lumia device will have the guaranteed high-end camera attached within the body of a Nokia Lumia 920 dimensioned phone. The first images of the Nokia EOS were found in a Chinese tech site WPDang, which is a renowned source for authenticated leaked devices. We have found in some other reports that the upcoming Nokia EOS, i.e is the Nokia Lumia Camera phone will have the same specs and design like the current Nokia Lumia 920 but will have a bigger camera bump at the back including a better megapixel camera, may be equals to Nokia 808 camera which has 41 megapixel.

Meanwhile a relatively new twitter account @ViziLeaks came up with some latest images of the device, showing a black Nokia Lumia type device with a huge camera fixed at the back with a lens covered by an automatic lens cover like the one found for Nokia N8 and 808 Pureview.

There is a large camera hump at the back of the device shown in images leaked by WPDang blog, but the overall thickness of the device is quite less than that found on Nokia 808. The body follows the design rule used in many Nokia Lumia smartphones and have the same dimensions. Despite having a huge camera lens the Nokia EOS is no more thicker than 9.7 mm which is found to be incredible. These images shows that the long awaited Nokia Lumia Pureview camera phone is on the verge of release.

All the images found online are arranged in this gallery below.