Backflip Studio famous for their Paper Toss game has finally released the squeal of the game Paper Toss 2. The previous version was a huge success with a whooping 50 Million downloads from the Google Play store. Paper Toss 2.0 comes to Android with more than a year behind the scheduled date for the iOS version which was released in December 2011.

Paper Toss 2.0 is an improved version of the previous title. Includes new levels with better more interactive 3D graphics and multiple objectives in which to dunk the ball of paper next to a dust bin, or a basket. 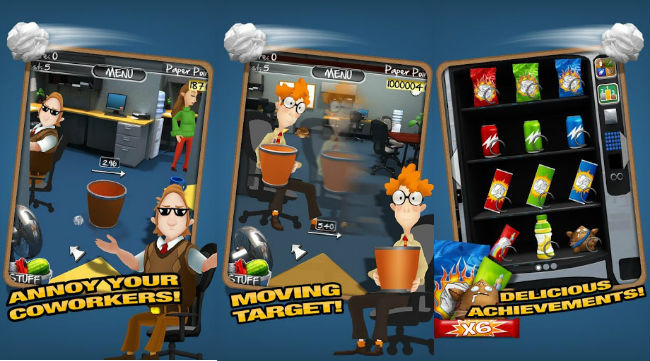 In this sequel we have to shed extra items such as bouncy balls, fruit and pomegranates, office objects that helps in potting your trash papers with much more physics in the original game-play introduced, which will surely improve our game-play and achievements. The strategy of the game however remains the same, we have to dunk the objects in the trash or other objects by calculating the trajectory well considering air velocity.

Paper Toss 2.0 is free to download on Google Play for any device with Android 2.1 or higher. The Add free version can be purchased for $0.99 with in the game and you can buy some coins for real money too which will help in unlocking the features within the game. You can download it by clicking on the image below.