First ever smartphone by the world’s largest beverage maker Pepsi is going to be announced seen and like always we have all the rumors out here. The Source, Which is a Chinese blog has confirmed that these leaked specs sheet and the leaked image of the device are authentic and the Pepsi P1 is going to be released soon.

With these leaked specs sheet the Pepsi P1 can be included in the mid range Android loaded smartphone which will come with the 5.5 inch Full HD display with the 1920 x 1080 Pixlels resolution. Under the hood the Pepsi P1 will be powered with the 1.7Ghz MediaTek processor with the expected model MT6592. Which is regarded as the true octa-core’ smartphone platform based on the energy-efficient ARM Cortex-A7 processor. The processor will be supported with the 2GB of RAM and another Mali GPU.

The device will come with the 16 GB of internal memory, while there isnt’t any source confirming about the external microSD card Slot for the phone. The Pepsi P1 will come with the 13 Megapixel main camera mounted on the back of the device and another 5 megapixel slefi camera on the front of the phone. The phone will be powered with the 3,000mAh battery and will have the latest Android 5.1 version installed on it. 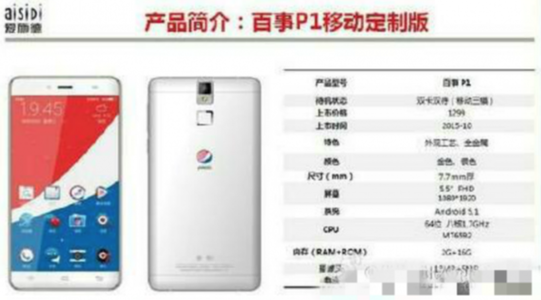 There are yet no reports about the availability of the device for the world market but the device will be made available for Chinese market immediately after the launch in Beijing.