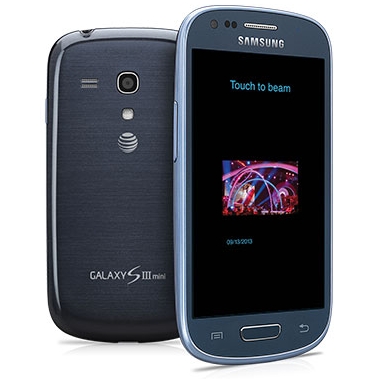 Samsung has given their older Samsung Galaxy S III Mini smartphone to a new venture and this time the top US cellular company AT&T has the opportunity to announce this new AT&T Samsung Galaxy S III Mini. The pleasant thing for the customers is  that it has been made available for only $0.99 not even a Full Dollar. However the company has made it a contract free version of the device which is available for $284.99. Which seems to be quite reasonable price for a Mid-Range Android device.

The Samsung Galaxy S III Mini which is introduced by AT&T as a product “for customers seeking a premium smartphone experience in an outstanding value”, the Samsung Galaxy S III Mini includes a 4 inch WVGA display, LTE and HSPA connectivity, VGA front-facing camera, 5MP rear camera with LED flash, dual-core 1.2GHz processor, 1GB of RAM, 8GB of internal memory, MicroSD card support (up to 64GB), along with a 2,000 mAh battery. AT&T’s S III Mini runs Android 4.2 out of the box, unlike the international version, that was released running Android 4.1.

Later this year, AT&T might also start selling the Samsung Galaxy S4 Mini. The are already in talks with Samsung to Increase their list of devices in United States.