The Samsung Galaxy S4 hasn’t yet popped up in stores but it has been on the way to U.S carriers as US Cellular and AT&T has already announced the availability of the device and they will start taking pre orders on 16th of April.

The Smartphone having 100’s of new software and hardware improvements also came up with some unique accessories list, and among those is the wireless charging kit. If you really looking forward to take advantage of the latest innovations in smartphone world, you should use the Wireless charging kit available as an extra optional pad with the Samsung Galaxy S4. This new kit will contain a special wireless charging featured back cover and the laying down charging dock. 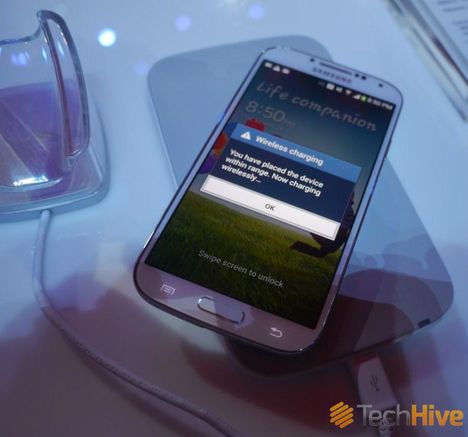 The wireless dock has already been available for the Samsung Galaxy S III, and it wasn’t much popular as it was announced quite late and customers didn’t find it much necessary to be equipped with the phone. Other smartphone makers like Nokia and LG also introduces the same Wireless pads along their branded smartphones. The Galaxy S4 charger pad is also seem to be a continuity to the ongoing trend. 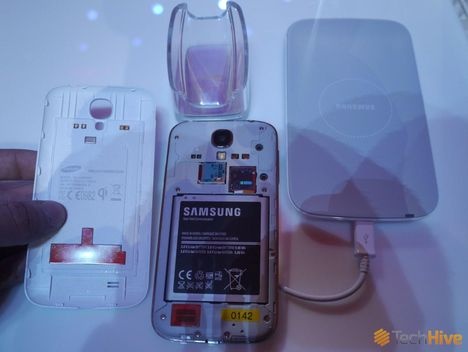 The price and the availability of this wireless charging kit isn’t yet disclosed. However the German blog TechHive mentioned that Samsung will make the shipment same time the Galaxy S4 hits the market. Further more the site suggests that the new Wireless charging back cover won’t make your device thicker. It has been designed professionally keeping in mind about the original size and shape of the device to be kept intact. Other information about this wireless gadget will disclosed later so keep in touch with us to get all the latest news from Samsung Galaxy S4 and it’s accessories.

Wireless charging will only become truly useful when ‘wireless chargers’ will be built into things – furniture, for example. When you don’t simply switch from plugging a cable into a phone to plugging a cable into something else. Until then, this is all gimmickry. With gimmicky accessories to go along, nice to show off to friends once, but not adding any real usefulness. That said, half of the Galaxy S4′s software features probably fall into the same category, so at least Samsung’s being consistent.