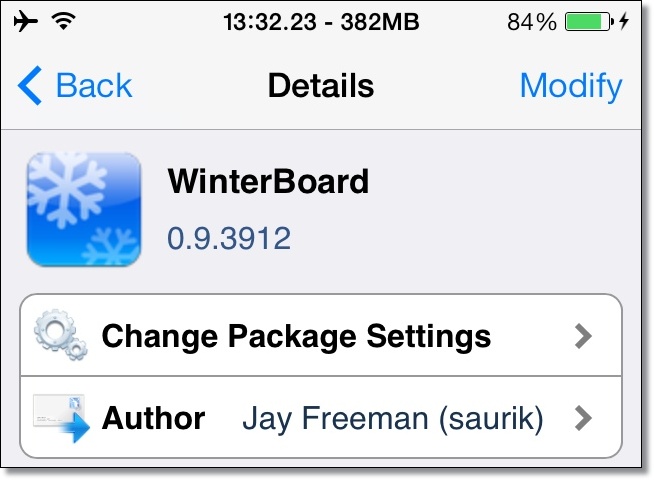 One of the most famous theme tweak for the Jailbreak iOS devices is the tool named WinterBoard, which has been finally updated to version 0.9.3912. This new update has been made for the latest iOS 7 devices including the latest iPhone 5S. The WinterBoard 0.9.3912 is loaded with the compatibility fixes and has been redesigned to the standard iOS 7 Flat look and design.

The main developer of the tweak “Saurik” has updated his twitter account with the statement that the famous WinterBoard theme tweak will not be updated to the latest iOS 7 flat UI unless the community that has been using the tweak for times add some contribution for the tweak. So this is quite sure that the community supported the developers team and hence we got the WinterBoard 0.9.3912 for iOS 7.

The Official features of the WinterBoard :

The Author Saurik has mentioned some important features in this update in his recent tweets. There is one more thing that this updated WinterBoard version will not support any type of wallpapers. Below are the tweets by Saurik on his accounts.

Wallpaper (whether png, html, or any of the other crazy formats that I should never have added to WinterBoard) is not currently supported on iOS 7: (.

Please be patient: there is a lot to fix.

WinterBoard 0.9.3912 (just released) runs on iOS 7 and seems compatible with ARM64; theme artists are encouraged to report any crashes / bugs.