The best third party ROM for any Android device is the CyanogenMod ROM, as the developers have proved that this is the most stable and lighter ROM as compared to other third party ROM developers making some for the Android devices. Recently the CynogenMod team of developers have published the Cynogen Camera app on the Google Play Store but it is yet available for users with the devices running the latest CyanogenMod 11S.

This is app is updated to version 2.0 and is the same app which we seen as a default camera app of the OnePlus One. If you have the same devce as mentioned above then you can head to the Google Play Store right now and download the Cyanogen Camera app on your device. But if you have a different Android device like Samsung Galaxy, Sony Xperia or Nexus 5 then you can download the Cyanogen Camera 2.0.003 apk from the given link below. 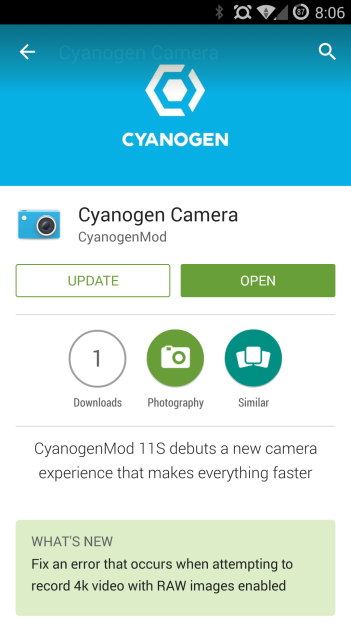 If you turn to the Play Store without a OnePlus One running the latest version of CM11S, don’t expect to get your hands on anything. For now, this app remains an exclusive, and its appearance in the marketplace serves as an easier way to roll out updates. A prior app, Gallery Next, opened up to non-CyanogenMod devices, but for now the Cyanogen Camera largely remains a “look, don’t touch” affair.

Here is the linke for Cyanogen Camera 2.0 apk.