Most of you might have heard about the new Google search integrated service for Android named Google Now. Which is probably one of the best feature included in Android 4.1 Jelly Bean. Google have stated earlier that they are making the iOS version of Google Now  and now that specific version of the app is available for iPhone and iPad.

Most of you might have used the Google Now app if you have owned an Android Jellybean device. But if you are an Apple iPhone or iPad user you might be new with this app. But let me tell you this is one of the best featured app for Android devices, and Google sets the same show for iOS devices too. 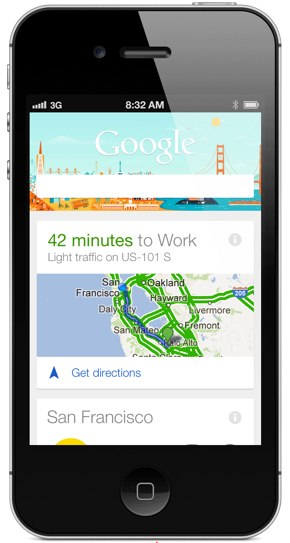 Many of the people who used Google Now on Android devices earlier have found that it is quite a useful app while traveling. With the support of whole new simple and clear interface Google Now helps you arrange all the needed information in some beautiful cards that display whenever you access the app. The details include weather, calendar, occasions and everything based with your Gmail account. So Google/Gmail account is considered to be the most essential subject if you want to use your Google Now effectively.So the Google Now for the iPhone and iPad brings a much-needed feature that many iOS users had been waiting for.

Moreover it works just like Siri and respond to the voice commands whether you want to look up for the days weather or you want to set an alarm. While Google Now has some extra features like filling your phone screen with boxes containing stock quotes, sports results, weather, travel directions and more, which can be displayed without making any request like you do in SIRI. So most of the people start thinking this as a SIRI killer, let see how it will affect the use of Siri on iOS based iPhones and iPads.