There are some images of the Alleged metal frame of the Samsung Galaxy S5 have been posted by the french tech blog Nowhereelse. The source claims that this frame is the first ever leaked image of the Galaxy S5. The source have claimed that the images have been shared by an employee of the Korean company. The spy shared the news with images that the future Samsung flagship phone will have this metal frame, although he didn’t specifically named Samsung Galaxy S5 in his statement. But we all are quite assured that this is the upcoming Samsung flagship device. 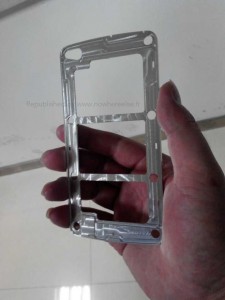 The Samsung Galaxy S5 is expected to be announced earlier next year, to be exact somewhere mid of February 2014. These leaked frame images shows that Samsung is already on the road to make this happen. The alleged metal frame of the Galaxy S5 measures  143.83mm long, 72.27mm wide  which makes it a bit larger in size than the previous Galaxy S4. So we can assume that Galaxy S5 will have a larger display as compared to the Galaxy S4.

In short, although the format of this framework is essentially identical to that of part of the latest models of the brand and its metallic design to echo one of the main rumors about the Galaxy S5. We will still be careful to confirm this frame as the Galaxy S5 frame as claimed by the French blogger. If you want to know more about the expected specs of the Samsung Galaxy S5 you can read this post too.