The future flagship devices by the Korean smartphone makers have been already in revealed in an event on 1st of March at MWC Barcelona. In this event Samsung presenter described some of the features of the upcoming Galaxy S6 and Galaxy S6 Edge, while ignoring some of the most talked about features in leaked reports on different sites even before the launch of these devices. But with all the hype created before the release of the device there comes the first ever issue that the Galaxy S6 has brought with it.

The device has been now made available officially as the release date was announced 10th of April. There are tons of new features added in both Samsung Galaxy S6 and Galaxy S6 Edge. Among them is the Fingerprint scanner which will be used to lock/unlock the smartphone as we have seen in the Apple’s iPhone 5S and later.

This FingerPrint Scanner can be reached easily and in this guide we will let you know how to get most out of this Fingerprint scanner as this can be used as an authenticating tool for other services as well including the Samsung Pay which has been regarded as the most important feature added in the Galaxy S6 and S6 Edge devices. Today we will let you know how to Lock or Unlock your Galaxy S6 using Fingerprint scanner option available on your device.

How To Lock and Unlock Samsung Galaxy S6 Using the Fingerprint Scanner:

All you have to do is follow the following guide to get to know how to Lock or Unlock your device using this latest Fingerprint scanner tool.

The new Samsung Galaxy S6 and S6 Edge lets you add all the 10 fingerprints on your device with the option to save them all separately. But I think the two thumbs Right and Left are quite much for any smartphone user. 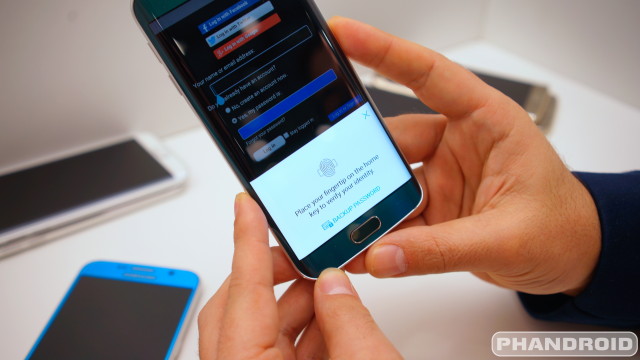 How to enable Fingerprint Lock on Samsung Galaxy S6:

To setup or enable Fingerprint lock all you need is to follow these steps given in this guide below.

The first use of this service shows that it works quite smoothly as seen on the Apple devices and is way better then the previous drag and swipe fingerprint scanner found on the Galaxy S5 and Note 4 devices. The same methods can be applied on the Samsung Galaxy S6 Edge device as well.