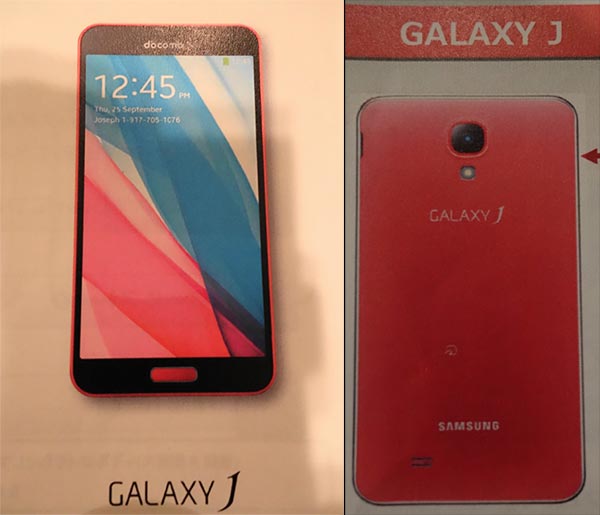 In the run to remain the top smartphone manufacture and sale company, Samsung has announced yet another series of smartphone named as Samsung Galaxy J. But this time the newly revealed Samsung Galaxy J will be made available only for the Japanese market with focusing the top Japanese cellular company NTT DoCoMo customers only. The South Korean firm has made special business deals with the neighboring country’s communication enterprise recently.

The new Samsung Galaxy J (SC-02F) has been found in a FCC Certification documents. Now a Japanese blog has managed to grab an image of the device and published it online. The source claim that the Samsung Galaxy J will have a 5-inch Full-HD display with 400ppi pixel density. The device will also have the latest Snapdragon 800 MSM8974 processor withe expected 3 GB of RAM supporting it.

There will be an 8 megapixel back and another 2 megapixel front camera on the device. The Galaxy J will have a special TV Antena for the local channel broadcasting. The device will show up in the  NTT Docomo’s 2013-14 Winter-Spring lineup to be announced in couple of days, to be exact October 10th.

The phone is expected to be released in different colors including pink that is shown in the leaked image. The Samsung Galaxy J would remain available inside Japan only and there is no chance that the device show up in the International market.