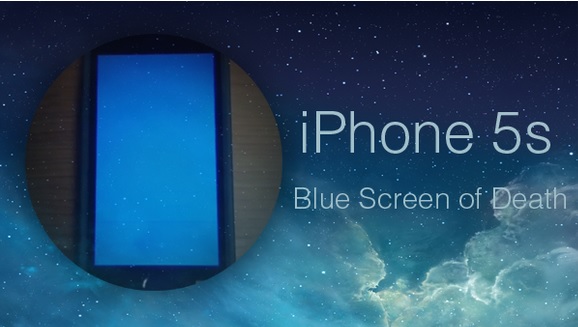 Apple carried on their rituals of announcing the most buggy operating systems and then carry on updating them. Just like their previous update of iOS 6 which had a lot of bugs at the time of release and even the Apple Maps which ridiculed their efforts all over the web. This time the iOS 7 is also loaded with bugs that need to be fixed. We already have the fixed update for the finger print security bug in the latest iOS 7.0.2 but now many iPhone 5S and iPhone 5C users found this annoying Blue Scree of Death issue which tends to a continuous crash of the device.

There are many users complaining about the issue when they updated their device on the latest iOS 7.0.2 version. Many iPhone 5S customers have reported that the “Blue screen of death ” issue occurs only when the launch the iWork in their updated iOS 7 device. For those of you who are not familiar with iWork. It is a free office suite provided by the Apple inc for their users using the latest iPhone 5S and iPhone 5C. The app didn’t come pre-loaded. It has to be downloaded from iTunes  if you have the right device for it.

1. Open any iWork app Installed on your iPhone 5S.

3. Once doc is opened, tap Home button. iPhone INSTANTLY Crashes and shows the  Blue screen, then automatic reboot occurs with in some seconds.

You can see the demonstration in this video uploaded on Vine by a iPhone 5C user which shows his iPhone getting effected by the same bug. He further claims that the procedure continues and he has to face such situation many times. Other users effected by this bug have erased all their content and settings of iPhone 5S but they keep on facing the issue even after that much effort. Some users even noticed it in the iOS 7.0 fresh release however Apple didn’t get the  shouts so therefore no fix happened in iOS 7.0.2.

The above short clip shows that the issue is most likely a software bug which leads to iOS 7 failure and the system crushes with the continuous Reboot cycle starts again. But this mess is quite preventable if you follow the following steps. So that you keep using the iWork app because the iOS 7x might take some time to appear in the update roaster.

How to fix blue screen of death Issue on iPhone 5S:

There is a simple step you have to follow to get rid of or fix Blue screen of death issue on iPhone 5S . But you have to sacrifice the Document & Data Synchronization with iCloud for some time till the fixed official update show up by Apple. So head to iCloud settings by going to>>

Go to “Settings -> iCloud -> Documents & Data”,  switch off the Pages, Switch Off Keynote and Numbers options.

In Addition to the above settings to avoid this annoying Blue Screen crashes, When you finish your editing the documents in iWork you better double click the home button to open the multi app window to swipe up or down to close the iWork app from the background.

Hope this will fix your issue till Apple fixes it officially in their future update. Don’t forget to share this awesome tip with your friends by sharing this post on clicking the sharing buttons below. Also Stay tune and follow us on Twitter, Facebook or  Google +, to know more tweaks and tips.