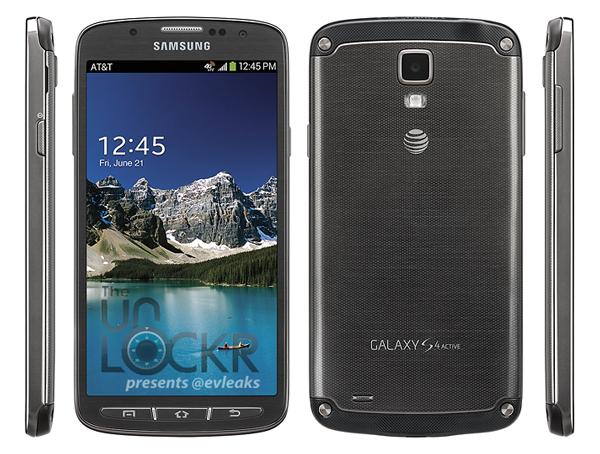 We have been talking about this phone for so long now and here is yet another clear evidence as our most acclaimed source @evleaks yet again comes up with another leaked press render of the Samsung Galaxy S4 Active, which is actually a rugged version of the one of the most successful Samsung device the Galaxy S4.

The analysts around the tech world had already pointed that the device will be announced at the London event which is expected to take place on June 20. The images shows that the this Galaxy S4 Active is a special AT&T variant, with a sliver and black mixed back cover there is a prominent AT&T logo which tells the whole story.

We have seen some leaked pictures of the Galaxy S4 Active earlier but this one looks a bit different with a special mono gray tone found around the entire body of the device with no other colors to be added all over it except some darker shades of matte gray that can be seen on the top and the bottom of the device. The 4 screws however are much more prominent as we see them in leaked images shown on GSMArena  earlier last month, and even the Video which joined the rumors later.

The guys at @evleaks claims that the device will have a Dual-core Snapdragon 600 processor, same super AMOLED full-HD 5-inch display  with high-end 441 ppi pixel density found on a Galaxy S4.The phone will come up with a 8 megapixel main camera and will support AT&T 4G-LTE  connectivity.

We already have made some specs sheet of the device in our previous posts, you should check them out too. But one thing’s clear all these informations are rumors and we can expect something different packed inside the Samsung Galaxy S4. Stay tuned as we will bring  more about this Hardcore Galaxy S4 Active in our future posts.