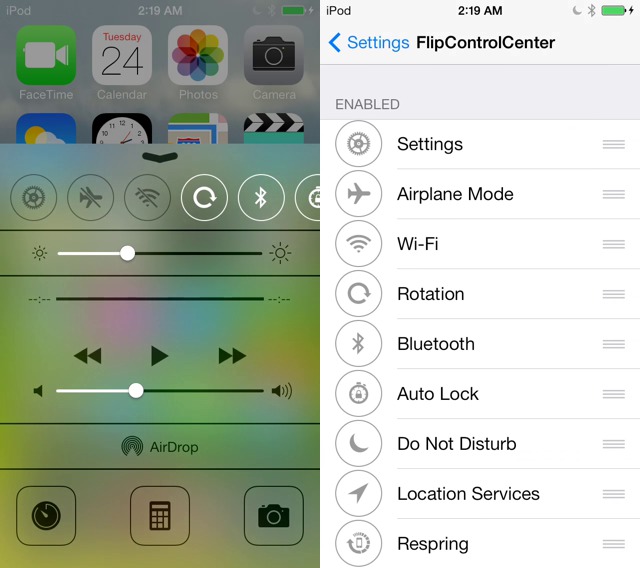 With the release of iOS 7 Jailbreak the developers have been working hard to develop some useful Cydia tweaks for the Jailbroken iOS 7 devices in this regard one of the famous Cydia tweaker Ryan Petrich has just released the new tweak which has been regarded as the best tweak for the iOS 7 devices. This tweak named FlipControlCenter has been made to customize the controle centre of the iOS 7.

This tweaks helps you to add extra options to the new flip controls that comes out of the bottom menu. You can modify the current icons by removing and adding new control icons in the menu.

The icons list contains the following setting menu icons that are given below. You can even add other controls the list contain following Flip Control Center options.

These Settings options can be changed any time with the option of FlipControlCenter in the setting menu of the iOS 7 devices. Or you can simply go to the Control Center settings menu and open the flip control center options to change it to the desired settings.

Beside this the developer also made the updated version of its famous tweak the DisplaRecorder, which can be also downloaded from the Cydia Tweak center to get a whole new look for the iOS 7 devices.